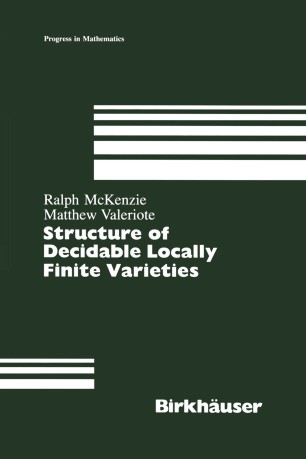 Part of the Progress in Mathematics book series (PM, volume 79)

A mathematically precise definition of the intuitive notion of "algorithm" was implicit in Kurt Godel's [1931] paper on formally undecidable propo­ sitions of arithmetic. During the 1930s, in the work of such mathemati­ cians as Alonzo Church, Stephen Kleene, Barkley Rosser and Alfred Tarski, Godel's idea evolved into the concept of a recursive function. Church pro­ posed the thesis, generally accepted today, that an effective algorithm is the same thing as a procedure whose output is a recursive function of the input (suitably coded as an integer). With these concepts, it became possible to prove that many familiar theories are undecidable (or non-recursive)-i. e. , that there does not exist an effective algorithm (recursive function) which would allow one to determine which sentences belong to the theory. It was clear from the beginning that any theory with a rich enough mathematical content must be undecidable. On the other hand, some theories with a substantial content are decidable. Examples of such decidabLe theories are the theory of Boolean algebras (Tarski [1949]), the theory of Abelian groups (Szmiele~ [1955]), and the theories of elementary arithmetic and geometry (Tarski [1951]' but Tarski discovered these results around 1930). The de­ termination of precise lines of division between the classes of decidable and undecidable theories became an important goal of research in this area. algebra we mean simply any structure (A, h(i E I)} consisting of By an a nonvoid set A and a system of finitary operations Ii over A.