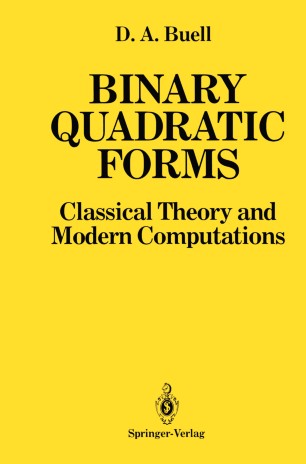 The first coherent exposition of the theory of binary quadratic forms was given by Gauss in the Disqnisitiones Arithmeticae. During the nine­ teenth century, as the theory of ideals and the rudiments of algebraic number theory were developed, it became clear that this theory of bi­ nary quadratic forms, so elementary and computationally explicit, was indeed just a special case of a much more elega,nt and abstract theory which, unfortunately, is not computationally explicit. In recent years the original theory has been laid aside. Gauss's proofs, which involved brute force computations that can be done in what is essentially a two­ dimensional vector space, have been dropped in favor of n-dimensional arguments which prove the general theorems of algebraic number the­ ory. In consequence, this elegant, yet pleasantly simple, theory has been neglected even as some of its results have become extremely useful in certain computations. I find this neglect unfortunate, because binary quadratic forms have two distinct attractions. First, the subject involves explicit computa­ tion and many of the computer programs can be quite simple. The use of computers in experimenting with examples is both meaningful and enjoyable; one can actually discover interesting results by com­ puting examples, noticing patterns in the "data," and then proving that the patterns result from the conclusion of some provable theorem.