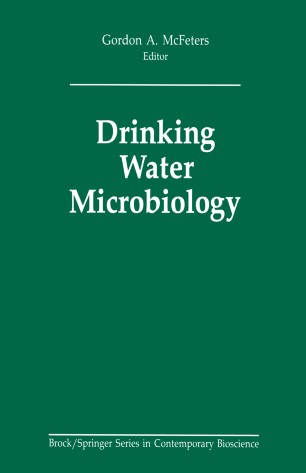 The microbiology of drinking water remains an important worldwide concern despite modem progress in science and engineering. Countries that are more technologically advanced have experienced a significant reduction in water­ borne morbidity within the last 100 years: This reduction has been achieved through the application of effective technologies for the treatment, disinfec­ tion, and distribution of potable water. However, morbidity resulting from the ingestion of contaminated water persists globally, and the available ep­ idemiological evidence (Waterborne Diseases in the United States, G. F. Craun, ed. , 1986, CRC Press) demonstrates a dramatic increase in the number of waterborne outbreaks and individual cases within the United States since the mid-1960s. In addition, it should also be noted that the incidence of water­ borne outbreaks of unknown etiology and those caused by "new" pathogens, such as Campylobaeter sp. , is also increasing in the United States. Although it might be debated whether these increases are real or an artifact resulting from more efficient reporting, it is clear that waterborne morbidity cannot be ignored in the industrialized world. More significantly, it represents one of the most important causes of illness within developing countries. Approxi­ mately one-half the world's population experiences diseases that are the direct consequence of drinking polluted water. Such illnesses are the primary cause of infant mortality in many Third World countries.