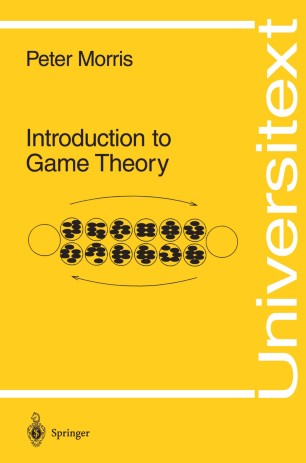 The mathematical theory of games has as its purpose the analysis of a wide range of competitive situations. These include most of the recreations which people usually call "games" such as chess, poker, bridge, backgam­ mon, baseball, and so forth, but also contests between companies, military forces, and nations. For the purposes of developing the theory, all these competitive situations are called games. The analysis of games has two goals. First, there is the descriptive goal of understanding why the parties ("players") in competitive situations behave as they do. The second is the more practical goal of being able to advise the players of the game as to the best way to play. The first goal is especially relevant when the game is on a large scale, has many players, and has complicated rules. The economy and international politics are good examples. In the ideal, the pursuit of the second goal would allow us to describe to each player a strategy which guarantees that he or she does as well as possible. As we shall see, this goal is too ambitious. In many games, the phrase "as well as possible" is hard to define. In other games, it can be defined and there is a clear-cut "solution" (that is, best way of playing).