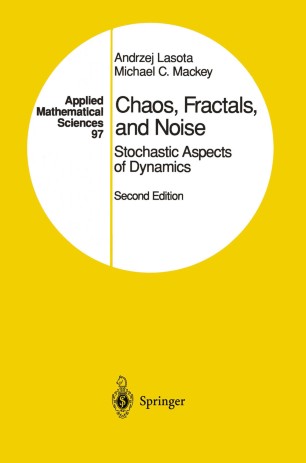 The first edition of this book was originally published in 1985 under the ti­ tle "Probabilistic Properties of Deterministic Systems. " In the intervening years, interest in so-called "chaotic" systems has continued unabated but with a more thoughtful and sober eye toward applications, as befits a ma­ turing field. This interest in the serious usage of the concepts and techniques of nonlinear dynamics by applied scientists has probably been spurred more by the availability of inexpensive computers than by any other factor. Thus, computer experiments have been prominent, suggesting the wealth of phe­ nomena that may be resident in nonlinear systems. In particular, they allow one to observe the interdependence between the deterministic and probabilistic properties of these systems such as the existence of invariant measures and densities, statistical stability and periodicity, the influence of stochastic perturbations, the formation of attractors, and many others. The aim of the book, and especially of this second edition, is to present recent theoretical methods which allow one to study these effects. We have taken the opportunity in this second edition to not only correct the errors of the first edition, but also to add substantially new material in five sections and a new chapter.