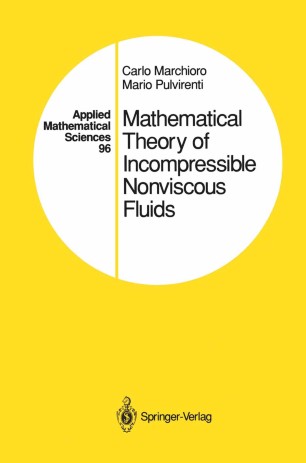 Fluid dynamics is an ancient science incredibly alive today. Modern technol­ ogy and new needs require a deeper knowledge of the behavior of real fluids, and new discoveries or steps forward pose, quite often, challenging and diffi­ cult new mathematical {::oblems. In this framework, a special role is played by incompressible nonviscous (sometimes called perfect) flows. This is a mathematical model consisting essentially of an evolution equation (the Euler equation) for the velocity field of fluids. Such an equation, which is nothing other than the Newton laws plus some additional structural hypo­ theses, was discovered by Euler in 1755, and although it is more than two centuries old, many fundamental questions concerning its solutions are still open. In particular, it is not known whether the solutions, for reasonably general initial conditions, develop singularities in a finite time, and very little is known about the long-term behavior of smooth solutions. These and other basic problems are still open, and this is one of the reasons why the mathe­ matical theory of perfect flows is far from being completed. Incompressible flows have been attached, by many distinguished mathe­ maticians, with a large variety of mathematical techniques so that, today, this field constitutes a very rich and stimulating part of applied mathematics.