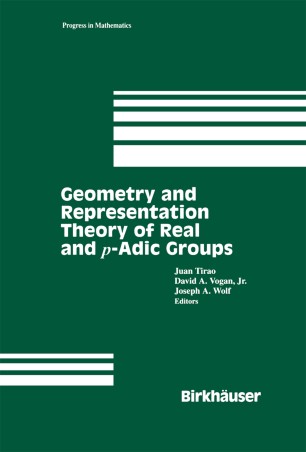 Geometry and Representation Theory of Real and p-adic groups

Part of the Progress in Mathematics book series (PM, volume 158)

The representation theory of Lie groups plays a central role in both clas­ sical and recent developments in many parts of mathematics and physics. In August, 1995, the Fifth Workshop on Representation Theory of Lie Groups and its Applications took place at the Universidad Nacional de Cordoba in Argentina. Organized by Joseph Wolf, Nolan Wallach, Roberto Miatello, Juan Tirao, and Jorge Vargas, the workshop offered expository courses on current research, and individual lectures on more specialized topics. The present vol­ ume reflects the dual character of the workshop. Many of the articles will be accessible to graduate students and others entering the field. Here is a rough outline of the mathematical content. (The editors beg the indulgence of the readers for any lapses in this preface in the high standards of historical and mathematical accuracy that were imposed on the authors of the articles. ) Connections between flag varieties and representation theory for real re­ ductive groups have been studied for almost fifty years, from the work of Gelfand and Naimark on principal series representations to that of Beilinson and Bernstein on localization. The article of Wolf provides a detailed introduc­ tion to the analytic side of these developments. He describes the construction of standard tempered representations in terms of square-integrable partially harmonic forms (on certain real group orbits on a flag variety), and outlines the ingredients in the Plancherel formula. Finally, he describes recent work on the complex geometry of real group orbits on partial flag varieties.