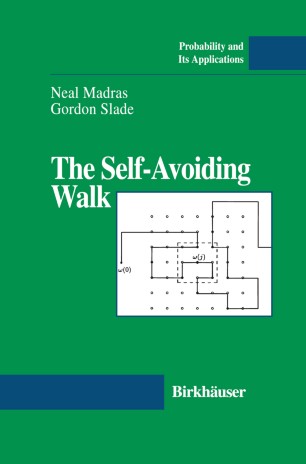 Part of the Probability and Its Applications book series (PA)

A self-avoiding walk is a path on a lattice that does not visit the same site more than once. In spite of this simple definition, many of the most basic questions about this model are difficult to resolve in a mathematically rigorous fashion. In particular, we do not know much about how far an n­ step self-avoiding walk typically travels from its starting point, or even how many such walks there are. These and other important questions about the self-avoiding walk remain unsolved in the rigorous mathematical sense, although the physics and chemistry communities have reached consensus on the answers by a variety of nonrigorous methods, including computer simulations. But there has been progress among mathematicians as well, much of it in the last decade, and the primary goal of this book is to give an account of the current state of the art as far as rigorous results are concerned. A second goal of this book is to discuss some of the applications of the self-avoiding walk in physics and chemistry, and to describe some of the nonrigorous methods used in those fields. The model originated in chem­ istry several decades ago as a model for long-chain polymer molecules. Since then it has become an important model in statistical physics, as it exhibits critical behaviour analogous to that occurring in the Ising model and related systems such as percolation.