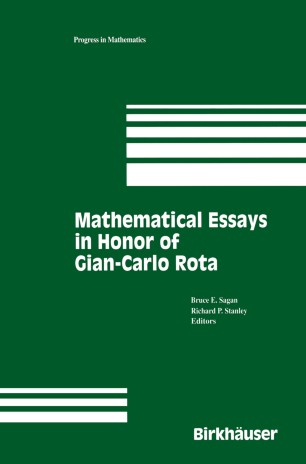 Part of the Progress in Mathematics book series (PM, volume 161)

In April of 1996 an array of mathematicians converged on Cambridge, Massachusetts, for the Rotafest and Umbral Calculus Workshop, two con­ ferences celebrating Gian-Carlo Rota's 64th birthday. It seemed appropriate when feting one of the world's great combinatorialists to have the anniversary be a power of 2 rather than the more mundane 65. The over seventy-five par­ ticipants included Rota's doctoral students, coauthors, and other colleagues from more than a dozen countries. As a further testament to the breadth and depth of his influence, the lectures ranged over a wide variety of topics from invariant theory to algebraic topology. This volume is a collection of articles written in Rota's honor. Some of them were presented at the Rotafest and Umbral Workshop while others were written especially for this Festschrift. We will say a little about each paper and point out how they are connected with the mathematical contributions of Rota himself.