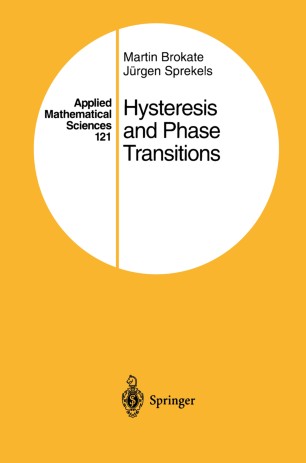 Hysteresis is an exciting and mathematically challenging phenomenon that oc­ curs in rather different situations: jt, can be a byproduct offundamental physical mechanisms (such as phase transitions) or the consequence of a degradation or imperfection (like the play in a mechanical system), or it is built deliberately into a system in order to monitor its behaviour, as in the case of the heat control via thermostats. The delicate interplay between memory effects and the occurrence of hys­ teresis loops has the effect that hysteresis is a genuinely nonlinear phenomenon which is usually non-smooth and thus not easy to treat mathematically. Hence it was only in the early seventies that the group of Russian scientists around M. A. Krasnoselskii initiated a systematic mathematical investigation of the phenomenon of hysteresis which culminated in the fundamental monograph Krasnoselskii-Pokrovskii (1983). In the meantime, many mathematicians have contributed to the mathematical theory, and the important monographs of 1. Mayergoyz (1991) and A. Visintin (1994a) have appeared. We came into contact with the notion of hysteresis around the year 1980.