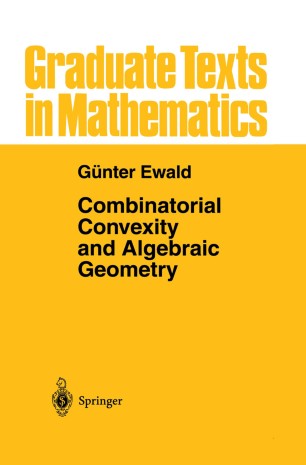 The aim of this book is to provide an introduction for students and nonspecialists to a fascinating relation between combinatorial geometry and algebraic geometry, as it has developed during the last two decades. This relation is known as the theory of toric varieties or sometimes as torus embeddings. Chapters I-IV provide a self-contained introduction to the theory of convex poly­ topes and polyhedral sets and can be used independently of any applications to algebraic geometry. Chapter V forms a link between the first and second part of the book. Though its material belongs to combinatorial convexity, its definitions and theorems are motivated by toric varieties. Often they simply translate algebraic geometric facts into combinatorial language. Chapters VI-VIII introduce toric va­ rieties in an elementary way, but one which may not, for specialists, be the most elegant. In considering toric varieties, many of the general notions of algebraic geometry occur and they can be dealt with in a concrete way. Therefore, Part 2 of the book may also serve as an introduction to algebraic geometry and preparation for farther reaching texts about this field. The prerequisites for both parts of the book are standard facts in linear algebra (including some facts on rings and fields) and calculus. Assuming those, all proofs in Chapters I-VII are complete with one exception (IV, Theorem 5.1). In Chapter VIII we use a few additional prerequisites with references from appropriate texts.