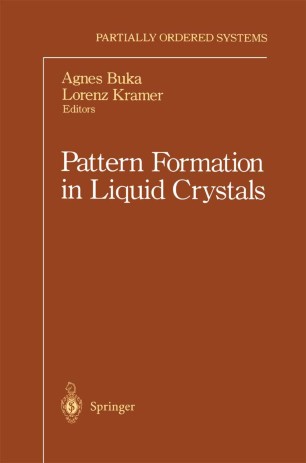 In the last 20 years the study of nonlinear nonequilibrium phenomena in spa­ tially extended systems, with particular emphasis on pattern-forming phenomena, has been one of the very active areas in physics, exhibiting interesting ramifi­ cations into other sciences. During this time the study of the "classic" systems, like Rayleigh-Benard convection and Taylor vortex flow in simple fluids, has also been supplemented by the study of more complex systems. Here liquid crystals have played, and are still playing, a major role. One might say that liquid crystals provide just the right amount and right kind of complexity. They are full of non­ linearities and give rise to new symmetry classes, which are sometimes actually simpler to deal with qualitatively, but they still allow a quantitative description of experiments in many cases. In fact one of the attractions of the field is the close contact between experimentalists and theorists. Hydrodynamic instabilities in liquid crystals had already experienced a period of intense study in the late 1960s and early 1970s, but at that time neither the ex­ perimental and theoretical tools nor the concepts had been developed sufficiently far to address the questions that have since been found to be of particular interest. The renewed interest is also evidenced by the fact that a new series of workshops has evolved. The first one took place in 1989 in Bayreuth and united participants from almost all groups working in pattern formation in liquid crystals.