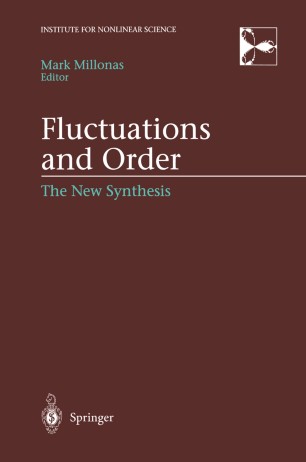 Part of the Institute for Nonlinear Science book series (INLS)

The volume that you have before you is the result of a growing realization that fluctuations in nonequilibrium systems playa much more important role than was 1 first believed. It has become clear that in nonequilibrium systems noise plays an active, one might even say a creative, role in processes involving self-organization, pattern formation, and coherence, as well as in biological information processing, energy transduction, and functionality. Now is not the time for a comprehensive summary of these new ideas, and I am certainly not the person to attempt such a thing. Rather, this short introductory essay (and the book as a whole) is an attempt to describe where we are at present and how the viewpoint that has evolved in the last decade or so differs from those of past decades. Fluctuations arise either because of the coupling of a particular system to an ex­ ternal unknown or "unknowable" system or because the particular description we are using is only a coarse-grained description which on some level is an approxima­ tion. We describe the unpredictable and random deviations from our deterministic equations of motion as noise or fluctuations. A nonequilibrium system is one in which there is a net flow of energy. There are, as I see it, four basic levels of sophistication, or paradigms, con­ cerning fluctuations in nature. At the lowest level of sophistication, there is an implicit assumption that noise is negligible: the deterministic paradigm.