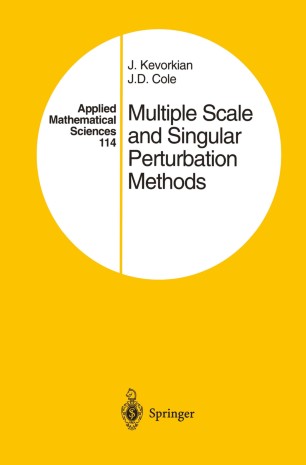 This book is a revised and updated version, including a substantial portion of new material, of our text Perturbation Methods in Applied Mathematics (Springer­ Verlag, 1981). We present the material at a level that assumes some familiarity with the basics of ordinary and partial differential equations. Some of the more advanced ideas are reviewed as needed; therefore this book can serve as a text in either an advanced undergraduate course or a graduate-level course on the subject. Perturbation methods, first used by astronomers to predict the effects of small disturbances on the nominal motions of celestial bodies, have now become widely used analytical tools in virtually all branches of science. A problem lends itself to perturbation analysis if it is "close" to a simpler problem that can be solved exactly. Typically, this closeness is measured by the occurrence of a small dimensionless parameter, E, in the governing system (consisting of differential equations and boundary conditions) so that for E = 0 the resulting system is exactly solvable. The main mathematical tool used is asymptotic expansion with respect to a suitable asymptotic sequence of functions of E. In a regular perturbation problem, a straightforward procedure leads to a system of differential equations and boundary conditions for each term in the asymptotic expansion. This system can be solved recursively, and the accuracy of the result improves as E gets smaller, for all values of the independent variables throughout the domain of interest. We discuss regular perturbation problems in the first chapter.