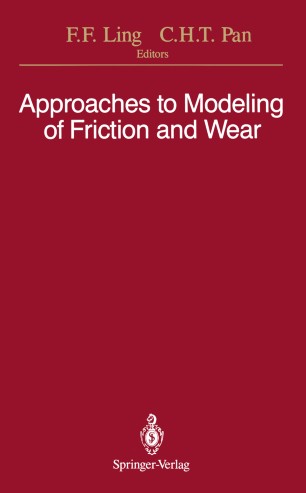 Approaches to Modeling of Friction and Wear

Proceedings of the Workshop on the Use of Surface Deformation Models to Predict Tribology Behavior, Columbia University in the City of New York, December 17–19, 1986

At the conclusion of the Conference on Tribology in the area of Wear Life Pre­ diction of Mechanical Components, which was held at the General Motors Research Laboratories and sponsored by the Industrial Research Institute, a very high pri­ ority recommendation was modeling of tribological systems. Since the appearance of the Conference Proceedings in 1985, the writers discussed the matter of modeling with Dr. Edward A. Saibel, Chief of the Solid Mechanics Branch, Engineering Sciences Division, U.S. Army Research Office. This discussion led to a proposal for the Workshop which resulted in this volume. The choice of proposal and Workshop name turned out to be more restricted than it needed to be. As such, the Workshop adopted the name for this volume, Approaches to Modeling of Friction and Wear. By design, the attendance was restricted to not more than 40 individuals so as to allow small group discussions. There were four panels which deliberated on the same questions after two invited area lectures. Section 1 contains the substance of the two lectures. Section 2 is the Workshop Summary which is a distillation of the four panel reports by the entire Workshop attendance. This was formally written up and edited by the eight panel session chairmen, i.e., each of the four panels met twice on two different questions under the leadership of a chairman for each session. Section 3 contains four brief position papers on the subject of the Workshop.