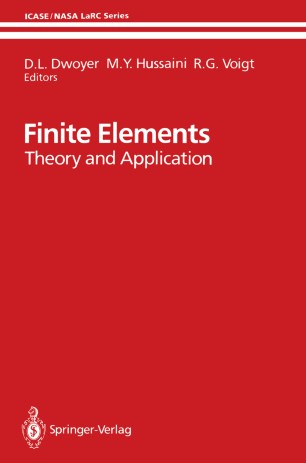 This volume covers the proceedings ofthe ICASE/LaRC workshop on "Finite Element Theory and Application" held during July 28-30, 1986. The purpose of this workshop was to provide an update on the status of finite element theory, to assess the impactoftbis theory on practice, and to suggest directions for Cuture research. There were thirteen participants in the workshop. Some of them were leading mathematicians working on the finite element theory, and the rest expert practitioners in the areas of fluid dynamics and structural analysis. The first six articles in this volume provide a brief review of the theoretical and computational aspects of finite element methods (FEM). The remaining seven articles deal with a variety of applications highlighting the type of results that are possible, and indicating areas which deserve future research. The first article is by Temam. lt provides an introduction and overview of the general finite element methods for the nonspecialist. lt also illustrates the power of finite element methods with two specific applications-the free­ surface flowjstructure interaction problern and the compressible Euler solu­ tion to the flow past a finite aspect ratio flat plate at incidence. The second article by Brezzi is againan introduction and overview ofmixed finite element methods. lt includes a brief discussion of special techniques for solving the discrete problem, as weil as some applications to certain basic problems in elasticity and hydrodynamics.