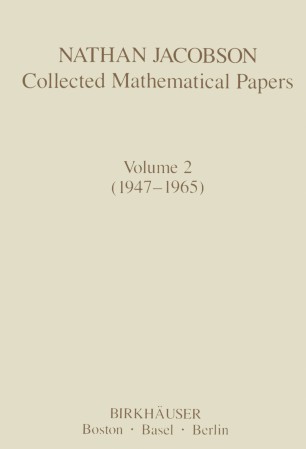 This collection contains all my published papers, both research and expository, that were published from 1934 to 1988. The research papers arranged in chronological order appear in Volume I and II and in the first part of Volume III. The expository papers, which are mainly reports presented at conferences, appear in chronological order in the last part of Volume III. Volume I covers the period 1910 to 1947, the year I moved to Yale, Volume II covers the period 1947 to 1965 when I became Chairman of the Department at Yale and Volume III covers the period from 1965 to 1989, which goes beyond my assumption of an emeritus status in 1981. I have divided the time interval covered in each volume into subintervals preceded by an account of my personal history during this period, and a commentary on the research papers published in the period. I have omitted commentaries on the expository papers and have sorted out the commentaries on the research papers according to the principal fields of my research. The personal history has been based on my recollections, checked against written documentation in my file of letters as well as diaries. One of these was a diary I kept of my trip to the USSR in 1961; the others were diaries Florie (Florence) kept during other major visits abroad. I have also consulted Professor A. W. Tucker on historical details on Princeton during the 1930's.