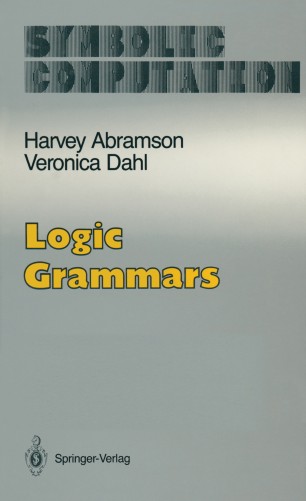 Logic grammars have found wide application both in natural language processing and in formal applications such as compiler writing. This book introduces the main concepts involving natural and formal language processing in logic programming, and discusses typical problems which the reader may encounter, proposing various methods for solving them. The basic material is presented in depth; advanced material, involving new logic grammar formalisms and applications, is presented with a view towards breadth. Major sections of the book include: grammars for formal language and linguistic research, writing a simple logic grammar, different types of logic grammars, applications, and logic grammars and concurrency. This book is intended for those interested in logic programming, artificial intelligence, computational linguistics, Fifth Generation computing, formal languages and compiling techniques. It may be read profitably by upper-level undergraduates, post-graduate students, and active researchers on the above-named areas. Some familiarity with Prolog and logic programming would be helpful; the authors, however, briefly describe Prolog and its relation to logic grammars. After reading Logic Grammars, the reader will be able to cope with the ever-increasing literature of this new and exciting field.