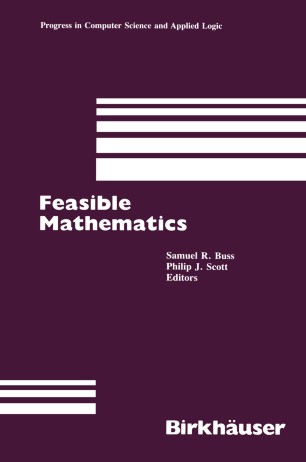 A so-called "effective" algorithm may require arbitrarily large finite amounts of time and space resources, and hence may not be practical in the real world. A "feasible" algorithm is one which only requires a limited amount of space and/or time for execution; the general idea is that a feasible algorithm is one which may be practical on today's or at least tomorrow's computers. There is no definitive analogue of Church's thesis giving a mathematical definition of feasibility; however, the most widely studied mathematical model of feasible computability is polynomial-time computability. Feasible Mathematics includes both the study of feasible computation from a mathematical and logical point of view and the reworking of traditional mathematics from the point of view of feasible computation. The diversity of Feasible Mathematics is illustrated by the. contents of this volume which includes papers on weak fragments of arithmetic, on higher type functionals, on bounded linear logic, on sub recursive definitions of complexity classes, on finite model theory, on models of feasible computation for real numbers, on vector spaces and on recursion theory. The vVorkshop on Feasible Mathematics was sponsored by the Mathematical Sciences Institute and was held at Cornell University, June 26-28, 1989.