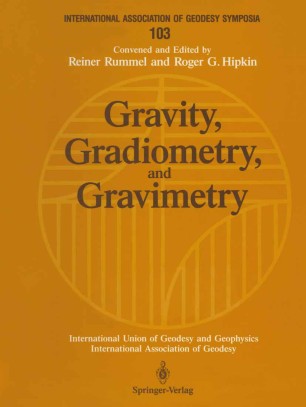 A General Meeting of the lAG was held in Edinburgh, Scotland, to commemorate its 125th Anniversary. The Edinburgh meeting, which attracted 360 scientific delegates and 80 accompanying persons from 44 countries, was hosted jointly by the Royal Society, the Royal Society of Edinburgh and the University of Edinburgh. The scientific part of the program, which was held in the Appleton Tower of the University, included the following five symposia: Symposium 101 Global and Regional Geodynamics Symposium 102 GPS and Other Radio Tracking Systems Symposium 103 Gravity, Gradiometry and Gravimetry Symposium 104 Sea Surface Topography, the Geoid and Vertical Datums Symposium 105 Earth Rotation and Coordinate Reference Frames All together there were 90 oral and 160 poster presentatio'ls. The program was arranged to prevent any overlapping of oral presentations, and thus enabled delegates to participate in all the sessions. The 125th Anniversary Ceremony took place on August 7, 1989, in the noble surroundings of the McEwan Hall where, 53 years earlier, Vening-Meinesz gave one of the two Union Lectures at the 6th General Assembly of the IUGG. The Ceremony commenced with welcome speeches by the British hosts. An interlude of traditional Scottish singing and dancing was followed by the Presidential Address given by Professor Ivan Mueller, on 125 years of international cooperation in geodesy. The Ceremony continued with greetings from representatives of sister societies, and was concluded by the presentation of the Levallois Medal to Professor Arne Bjerhammar.