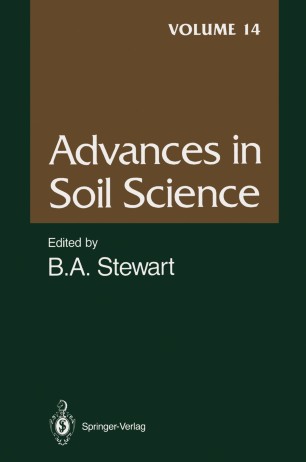 The study of soils today has taken on increased importance because a rapidly expanding population is placing demands on the soil never before experienced. This has led to an increase in land degradation. Land degradation is one of the most severe problems facing mankind. Volume 11 of Advances in Soil Science was devoted entirely to this critical area of soil science. From the beginning of agriculture until about 1950, increased food production came almost entirely from expanding the cropland base. Since 1950, however, the yield per unit of land area for major crops has increased dramatically. Much of the increase in yields was because of increased inputs of energy. Between 1950 and 1985, the farm tractor fleet quadrupled, world irrigated area tripled, and use of fertilizer increased ninefold. Between 1950 and 1985, the total energy used in world agriculture increased 6. 9 times. Until recently, sustainability was seldom, if ever, mentioned in agricultural literature. Now, it is one of the most widely used terms. The high costs ofirriga­ tion development, escalating energy costs during the 1970s, public concern over potential negative impacts of fertilizer and pesticides on water supplies, soil ero­ sion, soil compaction and salinity problems, and other concerns have caused many people to question whether many of the present agriculture systems can be sustained. As a result, soil science is beginning to focus more on sustaining the resource base.