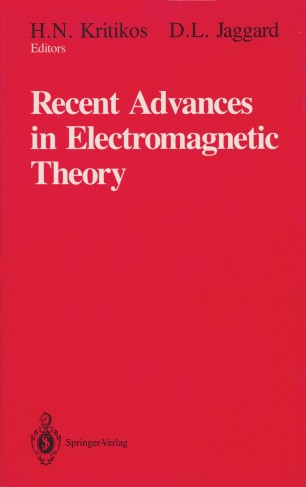 The contributions of this book represent only a small sample of the work of the many researcher electromagneticians who have had the pleasure of being associated with Professor Papas, either as students or as colleagues. Many of us continue to work in the many and diverse areas that modem electro­ magnetism encompasses. There is, however, a common thread that was derived from our association with Professor Papas that has greatly influenced our thinking and technical style of expression. Professor Papas, from his studies at Harvard, brought with him to Pasadena a very fundamental and classical point of view that was instilled in all those who were associated with him. He saw research problems as a combination offundamental physical and mathematical principles and the electromagnetic "reality. " He searched and demanded clarity and often, in the rather involved and engaging discussions which took place in his office, he demanded that the "baby picture" be clearly drawn on the blackboard. This requirement, certainly for some of us who were working in widely varied subjects ranging from relativistic plasmas to almost periodic media, has forced us to reexamine the fundamentals. The clear and lucid marriage of fundamental concepts to applications has been the trademark of Professor Papas's intellectual tradition, and has greatly in­ fluenced the thinking of all of those who have associated with him.