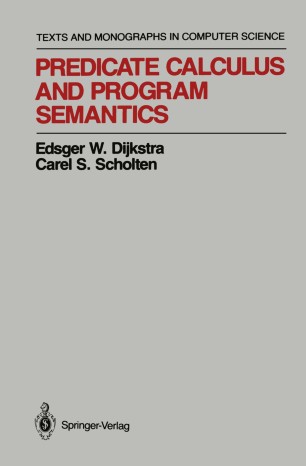 This booklet presents a reasonably self-contained theory of predicate trans­ former semantics. Predicate transformers were introduced by one of us (EWD) as a means for defining programming language semantics in a way that would directly support the systematic development of programs from their formal specifications. They met their original goal, but as time went on and program derivation became a more and more formal activity, their informal introduction and the fact that many of their properties had never been proved became more and more unsatisfactory. And so did the original exclusion of unbounded nondeterminacy. In 1982 we started to remedy these shortcomings. This little monograph is a result of that work. A possible -and even likely- criticism is that anyone sufficiently versed in lattice theory can easily derive all of our results himself. That criticism would be correct but somewhat beside the point. The first remark is that the average book on lattice theory is several times fatter (and probably less self­ contained) than this booklet. The second remark is that the predicate transformer semantics provided only one of the reasons for going through the pains of publication.