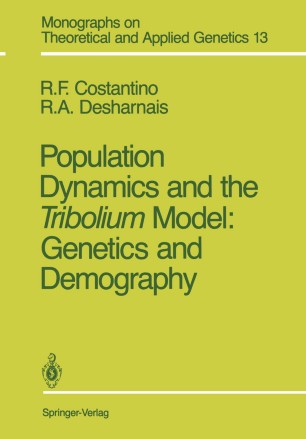 Population Dynamics and the Tribolium Model: Genetics and Demography

Part of the Monographs on Theoretical and Applied Genetics book series (GENETICS, volume 13)

The study of populations is becoming increasingly focused on dynamics. We believe there are two reasons for this trend. The ftrst is the impactof nonlinear dynamics with its exciting ideas and colorful language: bifurcations, domains of attraction, chaos, fractals, strange attractors. Complexity, which is so very much a part of biology, now seems to be also a part of mathematics. A second trend is the accessibility of the new concepts. Thebarriers tocommunicationbetween theoristandexperimentalistseemless impenetrable. The active participationofthe experimentalist means that the theory will obtain substance. Our role is the application of the theory of dynamics to the analysis ofbiological populations. We began our work early in 1979 by writing an ordinary differential equation for the rateofchange in adult numbers which was based on an equilibrium model proposed adecadeearlier. Duringthenextfewmonths weftlledournotebookswithstraightforward deductions from the model and its associated biological implications. Slowly, some of the biological observations were explained and papers followed on a variety of topics: genetic and demographic stability, stationary probability distributions for population size,population growth asabirth-deathprocess, natural selectionanddensity-dependent population growth, genetic disequilibrium, and the stationary stochastic dynamics of adult numbers.