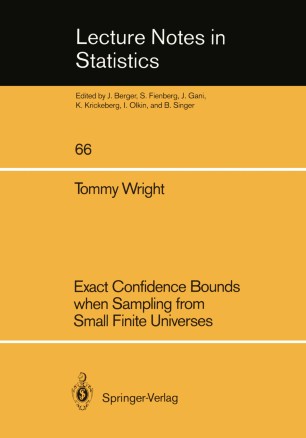 An Easy Reference Based on the Hypergeometric Distribution

There is a very simple and fundamental concept· to much of probability and statistics that can be conveyed using the following problem. PROBLEM. Assume a finite set (universe) of N units where A of the units have a particular attribute. The value of N is known while the value of A is unknown. If a proper subset (sample) of size n is selected randomly and a of the units in the subset are observed to have the particular attribute, what can be said about the unknown value of A? The problem is not new and almost anyone can describe several situations where a particular problem could be presented in this setting. Some recent references with different focuses include Cochran (1977); Williams (1978); Hajek (1981); Stuart (1984); Cassel, Samdal, and Wretman (1977); and Johnson and Kotz (1977). We focus on confidence interval estimation of A. Several methods for exact confidence interval estimation of A exist (Buonaccorsi, 1987, and Peskun, 1990), and this volume presents the theory and an extensive Table for one of them. One of the important contributions in Neyman (1934) is a discussion of the meaning of confidence interval estimation and its relationship with hypothesis testing which we will call the Neyman Approach. In Chapter 3 and following Neyman's Approach for simple random sampling (without replacement), we present an elementary development of exact confidence interval estimation of A as a response to the specific problem cited above.