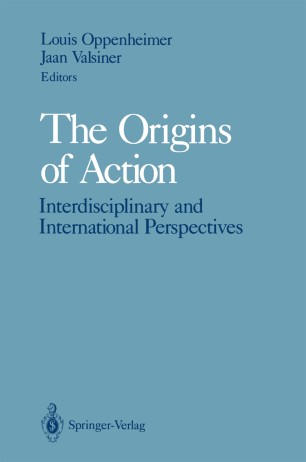 The Origins of Action

The Proliferation of Action Theories and Their Applications Jaan Valsiner and Louis Oppenheimer Our contemporary psychology becomes satiated by references to "action" and "activity. " Over the recent decade numerous theoretical perspectives have appeared. all of which operate with the notion of "action" (Ajzen. 1985; Eckensberger & Silbereisen. 1980; Keller & Reuss. 1984; Lantermann. 1980). each of which define it (see Oppenheimer. Chapter 1 of this volume). Likewise. the empirical literature in child psychology is filled with "action-theoretic" notions--facilitated by the ease of seeing children acting within their environments at a pace that surpasses that of even the most hyperactive adult! Of course. the empirical discourse in contemporary psychology is highly limited by its empiricistic emphasis. which dissociates empirical work from theoretically elaborate reasoning. At times. one can find in the literature an "anything goes" attitude--as long as the "umbrella" (theoretical) notion under which the given empirical study looks consensually respectable. the theoretical needs of "research" are satisfied. and psychologists can continue to accumulate "data" in their pursuit of "normal science. " The latter attitude to theory. of course, is but a convenient illusion. For any serious hope for progress in any discipline, the conceptual sphere must be explicitly developed further together with the empirical efforts. This sentiment led us to organize a symposium at the conference of the Society for Research in Child Development (SRCD) in Baltimore, Maryland, in 1987. The presentations at that symposium gave us the idea of editing a book on the origins of action.