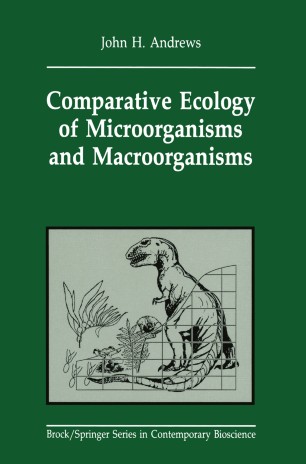 The most important feature of the modern synthetic theory of evolution is its foundation upon a great variety of biological disciplines. -G. L. STEBBINS, 1968, p. 17 This book is written with the goal of presenting ecologically significant anal­ ogies between the biology of microorganisms and macroorganisms. I consider such parallels to be important for two reasons. First, they serve to emphasize that however diverse life may be, there are common themes at the ecological level (not to mention other levels). Second, research done with either microbes or macroorganisms has implications which transcend a particular field of study. Although both points may appear obvious, the fact remains that at­ tempts to forge a conceptual synthesiS are astonishingly meager. While unify­ ing concepts may not necessarily be strictly correct, they enable one to draw analogies across disciplines. New starting points are discovered as a conse­ quence, and new ways of looking at things emerge. The macroscopic organisms ('macroorganisms') include most represen­ tatives of the plant and animal kingdoms. I interpret the term 'microorganism' (microbe) literally to mean the small or microscopic forms of life, and I include in this category the bacteria, the protists (excluding the macroscopic green, brown, and red algae), and the fungi. Certain higher organisms, such as many of the nematodes, fall logically within this realm, but are not discussed at any length.