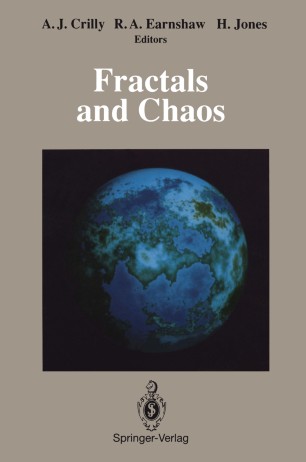 This volume is based upon the presentations made at an international conference in London on the subject of 'Fractals and Chaos'. The objective of the conference was to bring together some of the leading practitioners and exponents in the overlapping fields of fractal geometry and chaos theory, with a view to exploring some of the relationships between the two domains. Based on this initial conference and subsequent exchanges between the editors and the authors, revised and updated papers were produced. These papers are contained in the present volume. We thank all those who contributed to this effort by way of planning and organisation, and also all those who helped in the production of this volume. In particular, we wish to express our appreciation to Gerhard Rossbach, Computer Science Editor, Craig Van Dyck, Production Director, and Nancy A. Rogers, who did the typesetting. A. J. Crilly R. A. Earnshaw H. Jones 1 March 1990 Introduction Fractals and Chaos The word 'fractal' was coined by Benoit Mandelbrot in the late 1970s, but objects now defined as fractal in form have been known to artists and mathematicians for centuries. Mandelbrot's definition-"a set whose Hausdorff dimension is not an integer" -is clear in mathematical terms. In addition, related concepts are those of self-similarity and sub-divisibility. A fractal object is self-similar in that subsections of the object are similar in some sense to the whole object.