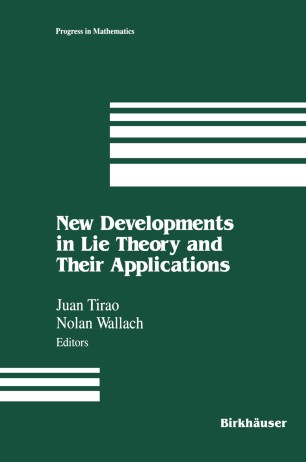 New Developments in Lie Theory and Their Applications

Part of the Progress in Mathematics book series (PM, volume 105)

Representation theory, and more generally Lie theory, has played a very important role in many of the recent developments of mathematics and in the interaction of mathematics with physics. In August-September 1989, a workshop (Third Workshop on Representation Theory of Lie Groups and its Applications) was held in the environs of C6rdoba, Argentina to present expositions of important recent developments in the field that would be accessible to graduate students and researchers in related fields. This volume contains articles that are edited versions of the lectures (and short courses) given at the workshop. Within representation theory, one of the main open problems is to determine the unitary dual of a real reductive group. Although this prob­ lem is as yet unsolved, the recent work of Barbasch, Vogan, Arthur as well as others has shed new light on the structure of the problem. The article of D. Vogan presents an exposition of some aspects of this prob­ lem, emphasizing an extension of the orbit method of Kostant, Kirillov. Several examples are given that explain why the orbit method should be extended and how this extension should be implemented.