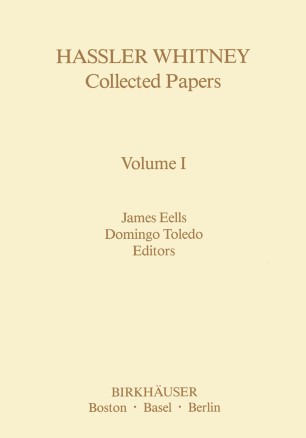 We present here the mathematical papers of Hassler Whitney. This collection contains all the published papers, with the exception of some short announcements that Whitney did not wish to be included. We also include the introduction to his book Geometric Integration Theory, and one previously unpublished manuscript on the four-color problem. The papers are presented under some broad categories: graphs· and combinatorics, differentiable functions and singularities, analytic spaces, manifolds, bundles and characteristic classes, topology and algebraic topology, geometric integration theory. Whitney intended to write an introduction to this collection. Unfortunately he left us no manuscript at the time of his death, May 10, 1989. We had discussed the possibility of using his paper "Moscow 1935 - Topology moving toward America," written for the Centennial of the American Mathematical Society, as part of his introduction to this collection, an idea which he much liked. We therefore include this paper, which contains personal information as well as mathematical reflections, as Whitney's own introduction to these volumes. Whitney's mathematical style, like his personal style, was that of an explorer and pioneer. One of the pictures included in these volumes shows him as a mountain climber. In mathematics, he preferred to work on undeveloped areas: break new ground and build foundations. During the last twenty years of his life he concentrated his efforts on developing an educational system that builds on the natural tendency in children to be explorers.