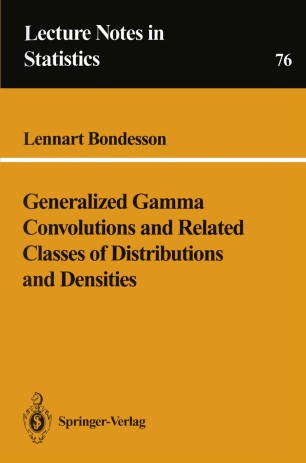 Generalized Gamma Convolutions and Related Classes of Distributions and Densities

Generalized Gamma convolutions were introduced by Olof Thorin in 1977 and were used by him to show that, in particular, the Lognormal distribution is infinitely divisible. After that a large number of papers rapidly appeared with new results in a somewhat random order. Many of the papers appeared in the Scandinavian Actuarial Journal. This work is an attempt to present the main results on this class of probability distributions and related classes in a rather logical order. The goal has been to be on a level that is not too advanced. However, since the field is rather technical, most readers will find difficult passages in the text. Those who do not want to visit a mysterious land situated between the land of probability theory and statistics and the land of classical analysis should not look at this work. When some years ago I submitted a survey to a journal it was suggested by the editor, K. Krickeberg, that it should be expanded to a book. However, at that time I was rather reluctant to do so since there remained so many problems to be solved or to be solved in a smoother way than before. Moreover, there was at that time some lack of probabilistic interpretations and applications. Many of the problems are now solved but still it is felt that more applications than those presented in the work could be found.