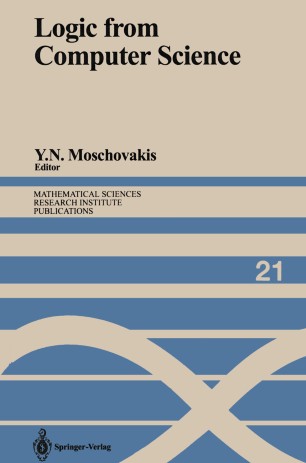 The volume is the outgrowth of a workshop with the same title held at MSRI in the week of November 13-17, 1989, and for those who did not get it, Logic from Computer Science is the converse of Logic in Computer Science, the full name of the highly successful annual LICS conferences. We meant to have a conference which would bring together the LICS commu­ nity with some of the more traditional "mathematical logicians" and where the emphasis would be on the flow of ideas from computer science to logic rather than the other way around. In a LICS talk, sometimes, the speaker presents a perfectly good theorem about (say) the A-calculus or finite model theory in terms of its potential applications rather than its (often more ob­ vious) intrinsic, foundational interest and intricate proof. This is not meant to be a criticism; the LICS meetings are, after all, organized by the IEEE Computer Society. We thought, for once, it would be fun to see what we would get if we asked the speakers to emphasize the relevance of their work for logic rather than computer science and to point out what is involved in the proofs. I think, mostly, it worked. In any case, the group of people represented as broad a selection of logicians as I have seen in recent years, and the quality of the talks was (in my view) exceptionally, unusually high. I learned a lot and (I think) others did too.