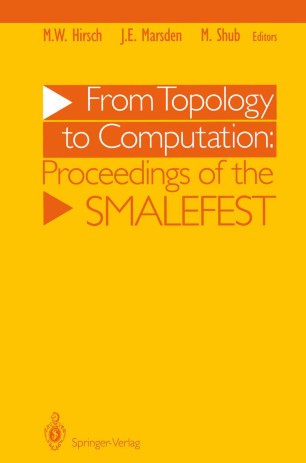 From Topology to Computation: Proceedings of the Smalefest

An extraordinary mathematical conference was held 5-9 August 1990 at the University of California at Berkeley: From Topology to Computation: Unity and Diversity in the Mathematical Sciences An International Research Conference in Honor of Stephen Smale's 60th Birthday The topics of the conference were some of the fields in which Smale has worked: • Differential Topology • Mathematical Economics • Dynamical Systems • Theory of Computation • Nonlinear Functional Analysis • Physical and Biological Applications This book comprises the proceedings of that conference. The goal of the conference was to gather in a single meeting mathemati­ cians working in the many fields to which Smale has made lasting con­ tributions. The theme "Unity and Diversity" is enlarged upon in the section entitled "Research Themes and Conference Schedule." The organizers hoped that illuminating connections between seemingly separate mathematical sub­ jects would emerge from the conference. Since such connections are not easily made in formal mathematical papers, the conference included discussions after each of the historical reviews of Smale's work in different fields. In addition, there was a final panel discussion at the end of the conference.