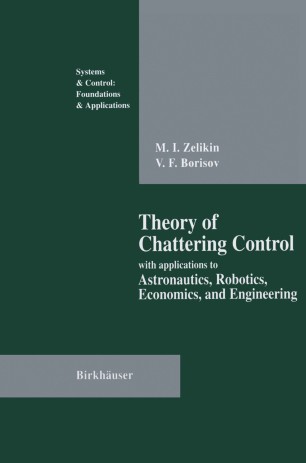 with applications to Astronautics, Robotics, Economics, and Engineering

The common experience in solving control problems shows that optimal control as a function of time proves to be piecewise analytic, having a finite number of jumps (called switches) on any finite-time interval. Meanwhile there exists an old example proposed by A.T. Fuller [1961) in which optimal control has an infinite number of switches on a finite-time interval. This phenomenon is called chattering. It has become increasingly clear that chattering is widespread. This book is devoted to its exploration. Chattering obstructs the direct use of Pontryagin's maximum principle because of the lack of a nonzero-length interval with a continuous control function. That is why the common experience appears misleading. It is the hidden symmetry of Fuller's problem that allows the explicit solution. Namely, there exists a one-parameter group which respects the optimal trajectories of the problem. When published in 1961, Fuller's example incited curiosity, but it was considered only "interesting" and soon was forgotten. The second wave of attention to chattering was raised about 12 years later when several other examples with optimal chattering trajectories were 1 found. All these examples were two-dimensional with the one-parameter group of symmetries.