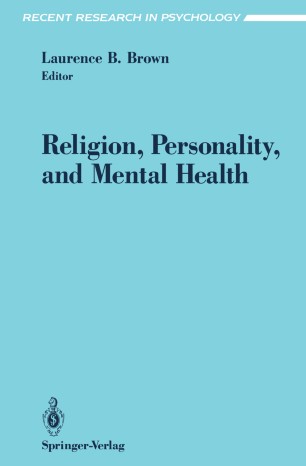 LAURENCE B. BROWN Nearly all the papers in this collection were prepared initially by a group of psychologists interested in the social scientific study of religion. They included some working with the mentally ill in medical, religious, or secular contexts, as well as teachers and researchers in psychology or theology. Their papers aim to test, or to reflect on, common prejudices about the links between mental health and religion, especially when they are thought to be mediated by personality characteristics. All the papers have been revised for this collection. A clear consensus emerged that religion has many positive effects, despite Wulff's (1991" p. 307) unguarded assertion that, "without ques­ tion the mentally disturbed are frequently attracted by religion." Any assumption that religion is necessarily a "danger" to health, or closely related to mental illness, is not supported by the evidence from carefully controlled studies that follow a social science perspective. Malony's paper, page 16 in this collection, therefore emphasizes that we must take account of the ways in which anyone's religion is integrated into their life, the functions it serves for them and their acceptance by other members of the religious and other groups to which they belong.