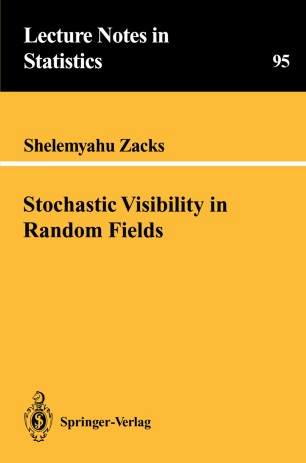 The present monograph is a comprehensive summary of the research on visibility in random fields, which I have conducted with the late Professor Micha Yadin for over ten years. This research, which resulted in several published papers and technical reports (see bibliography), was motivated by some military problems, which were brought to our attention by Mr. Pete Shugart of the US Army TRADOC Systems Analysis Activity, presently called US Army TRADOC Analysis Command. The Director ofTRASANA at the time, the late Dr. Wilbur Payne, identified the problems and encouraged the support and funding of this research by the US Army. Research contracts were first administered through the Office of Naval Research, and subsequently by the Army Research Office. We are most grateful to all involved for this support and encouragement. In 1986 I administered a three-day workshop on problem solving in the area of sto­ chastic visibility. This workshop was held at the White Sands Missile Range facility. A set of notes with some software were written for this workshop. This workshop led to the incorporation of some of the methods discussed in the present book into the Army simulation package CASTFOREM. Several people encouraged me to extend those notes and write the present monograph on the level of those notes, so that the material will be more widely available for applications.