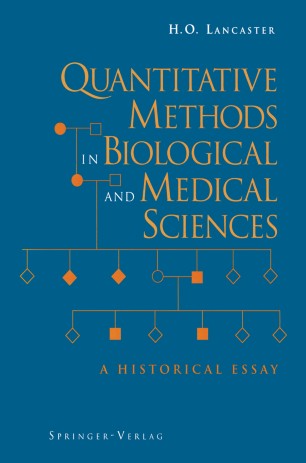 My original intention was to write a history of medical statistics, used in its prewar sense, expanding the writings on the subject by Major Greenwood, from which I formed many of my ideas in the early days immediately after the Second World War. In later years, I decided that the scope of his works was narrower than what I think is appropriate now, for he was writing in an era before the acceptance and use of the Fisherian methods and he was probably not aware of the mathematization of many parts of biological theory. Further, the boundary between the medical and biological sciences has largely disappeared. Many texts have now been written on branches of the theory and practice inspired by R. A. Fisher (see §4. 13). I discuss the history of the use of quantitative methods in the biological sciences, defined after the style of Peller (1967) as that branch of science that uses a quantitative approach to, or quantitative logical reasoning on, or biology. The mathematical tech­ any issue having to do with medicine niques are various and not classified here. Within the book I use "biological sciences" to include medicine but use the longer phrase in its title to avoid misunderstandings as to content. Moreover, most of the experimental work carried out in medical research laboratories is performed on animals other than man.