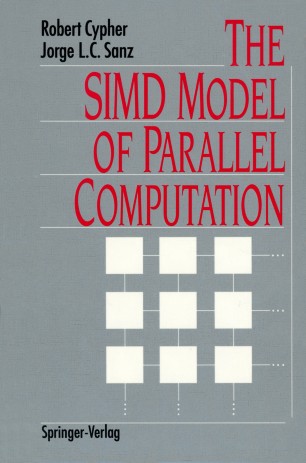 The SIMD Model of Parallel Computation

1.1 Background There are many paradigmatic statements in the literature claiming that this is the decade of parallel computation. A great deal of research is being de­ voted to developing architectures and algorithms for parallel machines with thousands, or even millions, of processors. Such massively parallel computers have been made feasible by advances in VLSI (very large scale integration) technology. In fact, a number of computers having over one thousand pro­ cessors are commercially available. Furthermore, it is reasonable to expect that as VLSI technology continues to improve, massively parallel computers will become increasingly affordable and common. However, despite the significant progress made in the field, many funda­ mental issues still remain unresolved. One of the most significant of these is the issue of a general purpose parallel architecture. There is currently a huge variety of parallel architectures that are either being built or proposed. The problem is whether a single parallel computer can perform efficiently on all computing applications.