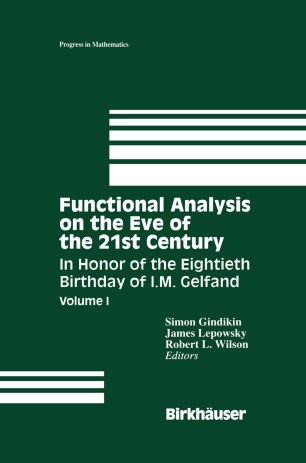 Functional Analysis on the Eve of the 21st Century

Volume I: In Honor of the Eightieth Birthday of I. M. Gelfand

Part of the Progress in Mathematics book series (PM, volume 131/132)

A four-day conference, "Functional Analysis on the Eve of the Twenty­ First Century," was held at Rutgers University, New Brunswick, New Jersey, from October 24 to 27, 1993, in honor of the eightieth birthday of Professor Israel Moiseyevich Gelfand. He was born in Krasnye Okna, near Odessa, on September 2, 1913. Israel Gelfand has played a crucial role in the development of functional analysis during the last half-century. His work and his philosophy have in fact helped to shape our understanding of the term "functional analysis" itself, as has the celebrated journal Functional Analysis and Its Applications, which he edited for many years. Functional analysis appeared at the beginning of the century in the classic papers of Hilbert on integral operators. Its crucial aspect was the geometric interpretation of families of functions as infinite-dimensional spaces, and of op­ erators (particularly differential and integral operators) as infinite-dimensional analogues of matrices, directly leading to the geometrization of spectral theory. This view of functional analysis as infinite-dimensional geometry organically included many facets of nineteenth-century classical analysis, such as power series, Fourier series and integrals, and other integral transforms.