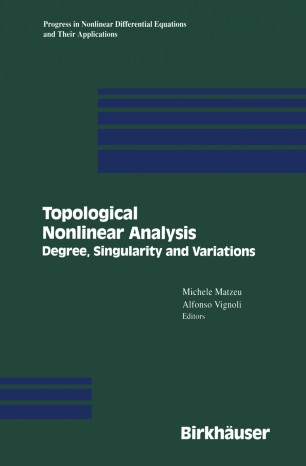 Part of the Progress in Nonlinear Differential Equations and Their Applications book series (PNLDE, volume 15)

Topological tools in Nonlinear Analysis had a tremendous develop­ ment during the last few decades. The three main streams of research in this field, Topological Degree, Singularity Theory and Variational Meth­ ods, have lately become impetuous rivers of scientific investigation. The process is still going on and the achievements in this area are spectacular. A most promising and rapidly developing field of research is the study of the role that symmetries play in nonlinear problems. Symmetries appear in a quite natural way in many problems in physics and in differential or symplectic geometry, such as closed orbits for autonomous Hamiltonian systems, configurations of symmetric elastic plates under pressure, Hopf Bifurcation, Taylor vortices, convective motions of fluids, oscillations of chemical reactions, etc . . . Some of these problems have been tackled recently by different techniques using equivariant versions of Degree, Singularity and Variations. The main purpose of the present volume is to give a survey of some of the most significant achievements obtained by topological methods in Nonlinear Analysis during the last two-three decades. The survey articles presented here reflect the personal taste and points of view of the authors (all of them well-known and distinguished specialists in their own fields) on the subject matter. A common feature of these papers is that of start­ ing with an historical introductory background of the different disciplines under consideration and climbing up to the heights of the most recent re­ sults.