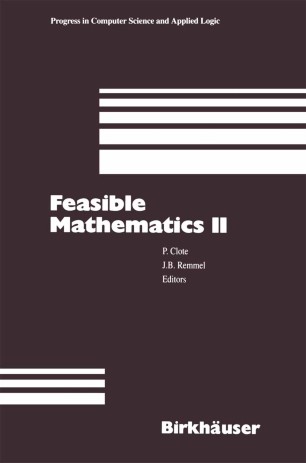 Perspicuity is part of proof. If the process by means of which I get a result were not surveyable, I might indeed make a note that this number is what comes out - but what fact is this supposed to confirm for me? I don't know 'what is supposed to come out' . . . . 1 -L. Wittgenstein A feasible computation uses small resources on an abstract computa­ tion device, such as a 'lUring machine or boolean circuit. Feasible math­ ematics concerns the study of feasible computations, using combinatorics and logic, as well as the study of feasibly presented mathematical structures such as groups, algebras, and so on. This volume contains contributions to feasible mathematics in three areas: computational complexity theory, proof theory and algebra, with substantial overlap between different fields. In computational complexity theory, the polynomial time hierarchy is characterized without the introduction of runtime bounds by the closure of certain initial functions under safe composition, predicative recursion on notation, and unbounded minimization (S. Bellantoni); an alternative way of looking at NP problems is introduced which focuses on which pa­ rameters of the problem are the cause of its computational complexity and completeness, density and separation/collapse results are given for a struc­ ture theory for parametrized problems (R. Downey and M. Fellows); new characterizations of PTIME and LINEAR SPACE are given using predicative recurrence over all finite tiers of certain stratified free algebras (D.