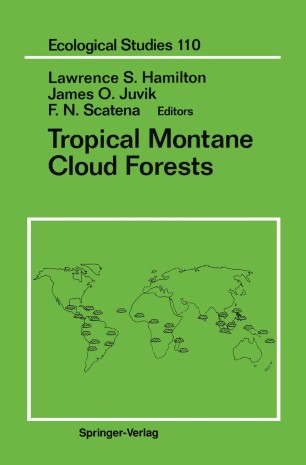 Until relatively recently the valuable tropical montane cloud forests (hereaf­ ter usually referred to as TMCFs) of the world had scarcely come under the assaults experienced by the downslope montane and lowland forests. TMCFs are not hospitable environments for human occupation, and their remoteness (except in places near Andean high mountain settlements and in the Ethiopian Highlands) and difficult terrain have given them de facto protection. The ad­ jacent upper montane rain forests have indeed been under assault for timber, fuelwood, and for conversion to grazing and agriculture for many decades, even centuries in the Andes, but true cloud forest has only come under ex­ ploitation as these lower elevational resources have disappeared. They have also been "nibbled" at from above where there have been alpine grasslands under grazing pressure. Increasingly now, however, these cloud forest eco­ systems are being fragmented, reduced, and disturbed at an alarming rate. It is now becoming recognized that steps must be taken rapidly to increase our understanding of TMCF and to achieve their conservation, because: their water-capture function is extremely important to society; • their species endemism is high; they serve as refugia for endangered species being marginalized in these environments by increasingly transformed lower elevation ecosystems; they are relatively little studied; yet, their value to science is extremely high; they have low resilience to disturbance; vii viii Preface and many other reasons, which will be discussed subsequently in this publi­ cation.