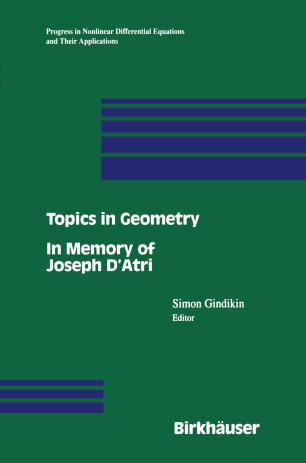 In Memory of Joseph D’Atri

Part of the Progress in Nonlinear Differential Equations and Their Applications book series (PNLDE, volume 20)

This collection of articles serves to commemorate the legacy of Joseph D'Atri, who passed away on April 29, 1993, a few days after his 55th birthday. Joe D' Atri is credited with several fundamental discoveries in ge­ ometry. In the beginning of his mathematical career, Joe was interested in the generalization of symmetrical spaces in the E. Cart an sense. Symmetric spaces, differentiated from other homogeneous manifolds by their geomet­ rical richness, allows the development of a deep analysis. Geometers have been constantly interested and challenged by the problem of extending the class of symmetric spaces so as to preserve their geometrical and analytical abundance. The name of D'Atri is tied to one of the most successful gen­ eralizations: Riemann manifolds in which (local) geodesic symmetries are volume-preserving (up to sign). In time, it turned out that the majority of interesting generalizations of symmetrical spaces are D'Atri spaces: natu­ ral reductive homogeneous spaces, Riemann manifolds whose geodesics are orbits of one-parameter subgroups, etc. The central place in D'Atri's research is occupied by homogeneous bounded domains in en, which are not symmetric. Such domains were discovered by Piatetskii-Shapiro in 1959, and given Joe's strong interest in the generalization of symmetric spaces, it was very natural for him to direct his research along this path.