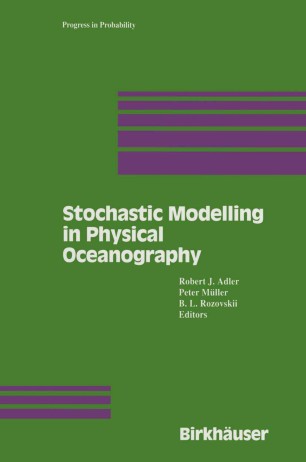 Part of the Progress in Probability book series (PRPR, volume 39)

The study of the ocean is almost as old as the history of mankind itself. When the first seafarers set out in their primitive ships they had to understand, as best they could, tides and currents, eddies and vortices, for lack of understanding often led to loss of live. These primitive oceanographers were, of course, primarily statisticians. They collected what empirical data they could, and passed it down, ini­ tially by word of mouth, to their descendants. Data collection continued throughout the millenia, and although data bases became larger, more re­ liable, and better codified, it was not really until surprisingly recently that mankind began to try to understand the physics behind these data, and, shortly afterwards, to attempt to model it. The basic modelling tool of physical oceanography is, today, the partial differential equation. Somehow, we all 'know" that if only we could find the right set of equations, with the right initial and boundary conditions, then we could solve the mysteries of ocean dynamics once and for all.