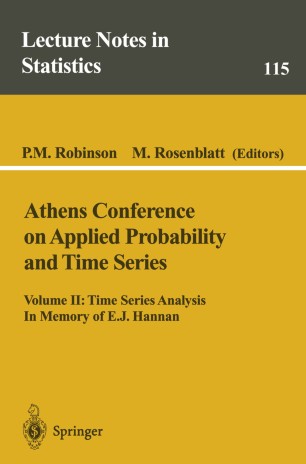 The Athens Conference on Applied Probability and Time Series in 1995 brought together researchers from across the world. The published papers appear in two volumes. Volume II presents papers on time series analysis, many of which were contributed to a meeting in March 1995 partly in honour of E.J. Hannan. The initial paper by P.M. Robinson discusses Ted Hannan's researches and their influence on current work in time series analysis. Other papers discuss methods for finite parameter Gaussian models, time series with infinite variance or stable marginal distribution, frequency domain methods, long range dependent processes, nonstationary processes, and nonlinear time series. The methods presented can be applied in a number of fields such as statistics, applied mathematics, engineering, economics and ecology. The papers include many of the topics of current interest in time series analysis and will be of interest to a wide range of researchers.