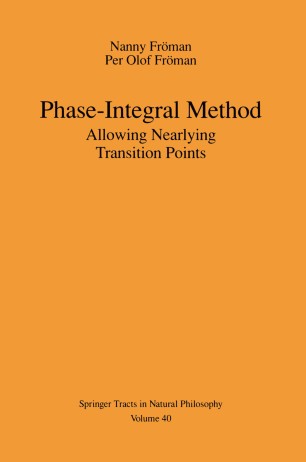 The efficiency of the phase-integral method developed by the present au­ thors has been shown both analytically and numerically in many publica­ tions. With the inclusion of supplementary quantities, closely related to new Stokes constants and obtained with the aid of comparison equation technique, important classes of problems in which transition points may approach each other become accessible to accurate analytical treatment. The exposition in this monograph is of a mathematical nature but has important physical applications, some examples of which are found in the adjoined papers. Thus, we would like to emphasize that, although we aim at mathematical rigor, our treatment is made primarily with physical needs in mind. To introduce the reader into the background of this book, we start by de­ scribing the phase-integral approximation of arbitrary order generated from an unspecified base function. This is done in Chapter 1, which is reprinted, after minor changes, from a review article. Chapter 2 is the result of re­ search work that was pursued during more than two decades, interrupted at times. It started in the sixties, when we were still using a phase-integral approximation, which in our present terminology corresponds to a special choice of the base function. At the time our primary aim was to derive expressions for the supplementary quantities needed in order to obtain an accurate connection formula for a real potential barrier, when the energy lies in the neighborhood of the top of the barrier.