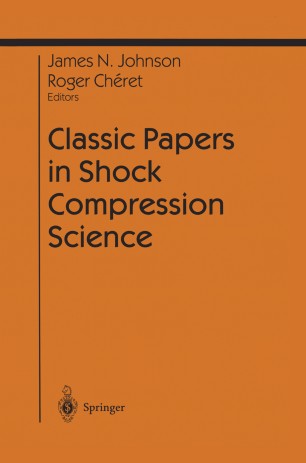 The field of shock compression science has a long and rich history involving contributions of mathematicians, physicists and engineers over approximately two hundred years. The middle of the nineteenth century was an especially ac­ tive period with the contributions of Riemann, Rankine and Hugoniot, among others. The middle of the twentieth century saw another increase in activity re­ lated to shock compression of condensed matter as a result of military applica­ tions. It was also recognized that shock compression provided a means of sub­ jecting solids and liquids to extreme states of temperature and pressure difficult to achieve by static means. It has thus become an academic study in its own right. The principal modem contributions to this science were summarized in the landmark paper by Rice, McQueen and Walsh [Solid State Physics, Vol. 6, pp. 1-63, 1958]. As this field has continued to mature, interest has increased in tracing the early papers that have served as the foundations of the field. Cheret [Shock Compression of Condensed Matter - 1989, Elsevier Sci. Pub. B. V. , pp 11-19, 1990) has contributed to this literature with his review of the life of Hugoniot on the one-hundredth anniversary of the publication of Hugoniot's classic paper on the propagation of discontinuous waves in gases. This contribution prompted additional historical investigation involving the precursors to Hugoniot.