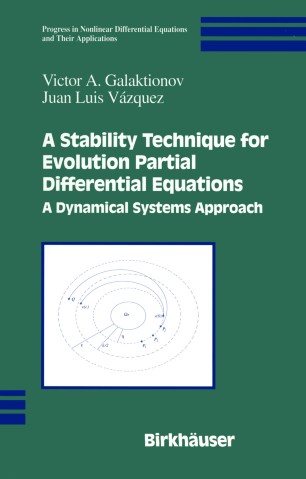 Part of the Progress in Nonlinear Differential Equations and Their Applications book series (PNLDE, volume 56)

common feature is that these evolution problems can be formulated as asymptoti­ cally small perturbations of certain dynamical systems with better-known behaviour. Now, it usually happens that the perturbation is small in a very weak sense, hence the difficulty (or impossibility) of applying more classical techniques. Though the method originated with the analysis of critical behaviour for evolu­ tion PDEs, in its abstract formulation it deals with a nonautonomous abstract differ­ ential equation (NDE) (1) Ut = A(u) + C(u, t), t > 0, where u has values in a Banach space, like an LP space, A is an autonomous (time-independent) operator and C is an asymptotically small perturbation, so that C(u(t), t) ~ ° as t ~ 00 along orbits {u(t)} of the evolution in a sense to be made precise, which in practice can be quite weak. We work in a situation in which the autonomous (limit) differential equation (ADE) Ut = A(u) (2) has a well-known asymptotic behaviour, and we want to prove that for large times the orbits of the original evolution problem converge to a certain class of limits of the autonomous equation. More precisely, we want to prove that the orbits of (NDE) are attracted by a certain limit set [2* of (ADE), which may consist of equilibria of the autonomous equation, or it can be a more complicated object.