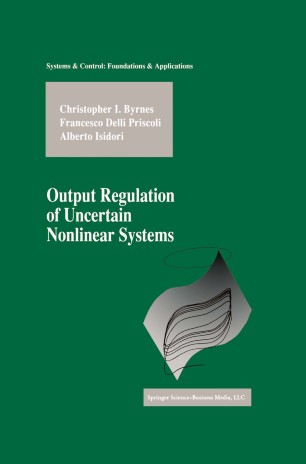 The problem of controlling the output of a system so as to achieve asymptotic tracking of prescribed trajectories and/or asymptotic re­ jection of undesired disturbances is a central problem in control the­ ory. A classical setup in which the problem was posed and success­ fully addressed - in the context of linear, time-invariant and finite dimensional systems - is the one in which the exogenous inputs, namely commands and disturbances, may range over the set of all possible trajectories ofa given autonomous linear system, commonly known as the exogeneous system or, more the exosystem. The case when the exogeneous system is a harmonic oscillator is, of course, classical. Even in this special case, the difference between state and error measurement feedback in the problem ofoutput reg­ ulation is profound. To know the initial condition of the exosystem is to know the amplitude and phase of the corresponding sinusoid. On the other hand, to solve the output regulation problem in this case with only error measurement feedback is to track, or attenu­ ate, a sinusoid ofknown frequency but with unknown amplitude and phase. This is in sharp contrast with alternative approaches, such as exact output tracking, where in lieu of the assumption that a signal is within a class of signals generated by an exogenous system, one instead assumes complete knowledge of the past, present and future time history of the trajectory to be tracked.