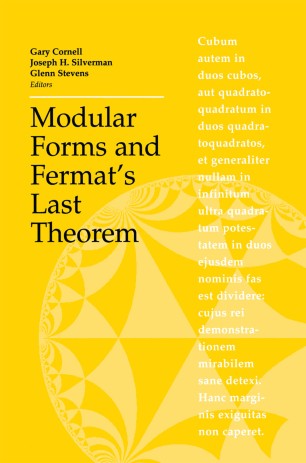 This volume contains expanded versions of lectures given at an instructional conference on number theory and arithmetic geometry held August 9 through 18, 1995 at Boston University. Contributor's includeThe purpose of the conference, and of this book, is to introduce and explain the many ideas and techniques used by Wiles in his proof that every (semi-stable) elliptic curve over Q is modular, and to explain how Wiles' result can be combined with Ribet's theorem and ideas of Frey and Serre to show, at long last, that Fermat's Last Theorem is true. The book begins with an overview of the complete proof, followed by several introductory chapters surveying the basic theory of elliptic curves, modular functions, modular curves, Galois cohomology, and finite group schemes. Representation theory, which lies at the core of Wiles' proof, is dealt with in a chapter on automorphic representations and the Langlands-Tunnell theorem, and this is followed by in-depth discussions of Serre's conjectures, Galois deformations, universal deformation rings, Hecke algebras, complete intersections and more, as the reader is led step-by-step through Wiles' proof. In recognition of the historical significance of Fermat's Last Theorem, the volume concludes by looking both forward and backward in time, reflecting on the history of the problem, while placing Wiles' theorem into a more general Diophantine context suggesting future applications. Students and professional mathematicians alike will find this volume to be an indispensable resource for mastering the epoch-making proof of Fermat's Last Theorem.